Mortgage rates jumped above the 4 percent benchmark in the week following the election, and many industry experts are advising buyers to lock their rate immediately.  Despite being the biggest one-week increase in over three years, the market remains volatile and rates may continue to rise quickly. 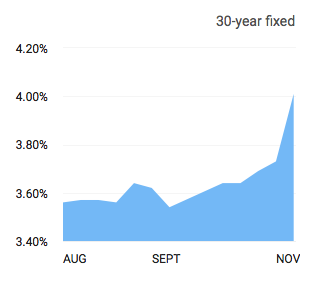 While we haven’t seen rates above 4 percent since January 2016, lenders are quick to remind borrowers that rates remain historically low.  In fact, the majority of buyers locked in at 10 percent or higher in 1990, and rates under 5 percent were virtually unheard of until 2010.