On December 13th, Santa Lucia marks the start of the Christmas season in Sweden.

Historically it began before dawn, when the oldest daughter in a family (representing Saint Lucia in her white robe and a red sash), wearing a crown of evergreen decorated with lingonberries and seven candles (nowadays common to wear electric candles), entered her parent’s room, followed by her siblings, and woke them with coffee and Saffron buns (lussekatter). 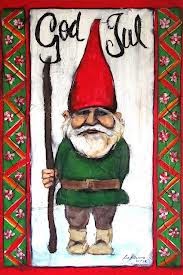 The earliest known appearance of Santa Lucia in Sweden was 1764 in a country house. Not until 1927, did Swedish cities make these private celebrations public during which Swedish boys and girls participated in lighting up the city with candles and festive songs. 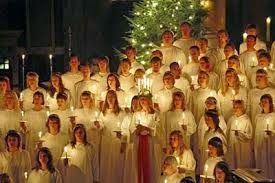 The Lucia tradition is a blend of traditions and can be traced back to St Lucia of Sicily, a martyr and saint who died in the 4th century and to Swedish legend of Lucia as Adam’s first wife. St Lucia of Sicily is said to have given away her dowry to the poor and this was denounced by her fiancé and she was then blinded and burned.
It is considered a winter light festival since December is the darkest month of the year and December 13th (using the old calendar) was the seen as the longest night of the year.

Santa Lucia is a popular events in schools, retirement homes, hospitals and many offices every year where  children dress up as Lucia, her attendants (they don’t wear  the crown on their heads but instead a candle in one hand), santa gnomes, gingerbread cookies and starboys.  They perform many traditional songs and bring light and happiness wherever they go.